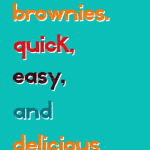 I’m going to be upfront about this, these brownies aren’t fancy or refined. I have other recipes that are, but this one unashamedly isn’t one of them. They have vegetable oil instead of melted butter and corn syrup instead of honey. They don’t have chocolate slowly melted in coffee stirred into them (check out my Minty Devil Cake for that one) but they’re delicious. And there are two good reasons that they are the way they are: first, I started using this recipe in elementary school when I didn’t know any better and it’s faster and easier to measure vegetable oil then it is to melt butter when you’ve already pulled out a metal bowl and second, I tried it the other way once and it just wasn’t the same. Since neither I, nor probably most of you, are classical trained bakers let’s just call it good and move on. So that’s my disclaimer, now on to the brownies.

Like I said earlier, I have been making these brownies for years and always come back to them because they are easy to make and really yummy. The thing that really makes them stand out is the frosting. Brownies with frosting? Yes, trust me, you’re going to love it. It’s kind of like a layer of soft fudge on top of your brownie.

Sterling decided to help me this time around which always makes baking more fun and a bit more messy. So first thing off Sterling donned his new apron from Olive You Sew (a great Etsy seller that sells non-frilly aprons which are harder to find than you would think).

Now it was time to get messy. We did use the mixer for the brownies but it’s really easy with just a spoon too. For the frosting I would go with either a hand mixer or a whisk because as pretty as the Kitchen Aid is its not great at getting everything on the bottom and this is a pretty small recipe.

Mix oil and sugar together. Mix in vanilla and eggs. Add in dry ingredients (minus nuts) and stir till it’s a consistent texture and color. Fold in nuts if you want them. Walnuts work, but I like pecans better, but we went nut free this time. Pour it all into an 8×8 greased pan and bake 20-22 mins in a 350 degree oven. Test it with a toothpick or knife to make sure it’s fully cooked and then pull it out and let it cool in the pan.

Mix everything except the milk together until it looks like sand or small crumbles. Add & mix in milk 1 tablespoon at a time. You want it smooth and dark but fairly thick. Spread over cooled brownies.

If there is any additional frosting put it on graham crackers, so good! (Was totally bummed when I realized there were only three mini graham crackers left in the box.)

Cut the brownies, pour yourself a glass of milk and enjoy!

That’s it. You can be enjoying fresh brownies in less than an hour. What are you waiting for?

5 Replies to “Brownies…So Easy and So Yummy!”

This site uses Akismet to reduce spam. Learn how your comment data is processed.

But what is it really...About Us

Want to see what we’re mixing up? 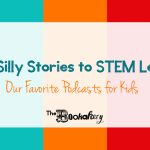 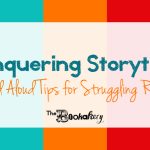 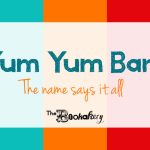 All the legal stuff

This website uses cookies to improve your experience while you navigate through the website. Out of these, the cookies that are categorized as necessary are stored on your browser as they are essential for the working of basic functionalities of the website. We also use third-party cookies that help us analyze and understand how you use this website. These cookies will be stored in your browser only with your consent. You also have the option to opt-out of these cookies. But opting out of some of these cookies may affect your browsing experience.
Necessary Always Enabled
Necessary cookies are absolutely essential for the website to function properly. This category only includes cookies that ensures basic functionalities and security features of the website. These cookies do not store any personal information.
Non-necessary
Any cookies that may not be particularly necessary for the website to function and is used specifically to collect user personal data via analytics, ads, other embedded contents are termed as non-necessary cookies. It is mandatory to procure user consent prior to running these cookies on your website.
SAVE & ACCEPT